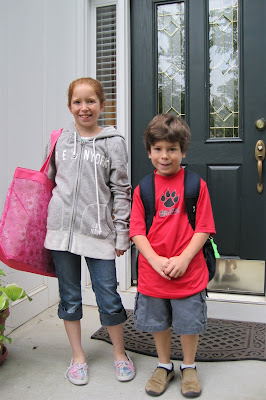 Here are Abbie and Jacob as they get ready to leave for their last day of school! The last couple of weeks has been a whirlwind of activities including: class parties, middle school orientation, a talent show for Abbie plus numerous rehearsals, programs and activities for Zac, teacher gift prep, and Abbie's 5th grade promotion ceremony. And now it is all over for the summer! 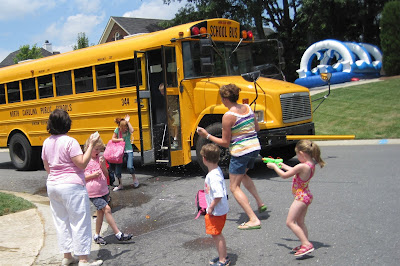 Last year was the the first year the kids ever rode a school bus. So we were not aware of our neighborhood tradition for the last day of school and missed out. This year I was there, armed and ready with my camera....
When the elementary kids get off the bus, they are bombarded with water balloons! Parents come prepared with wagons and rolling coolers filled with dozens of filled balloons. Abbie is ducking as she gets off the bus, worried about all her stuff getting wet. {See that big inflatable in the background of the photo above? More about that in a minute!} 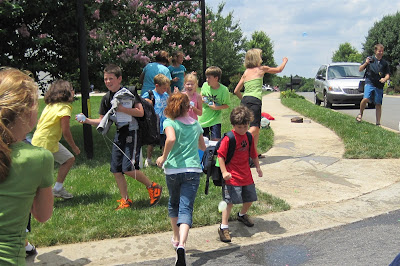 Of course, as soon as the kids get off the bus, they run to drop their gear, and then they engage in battle. I got hit several times in the back as I took these pictures! 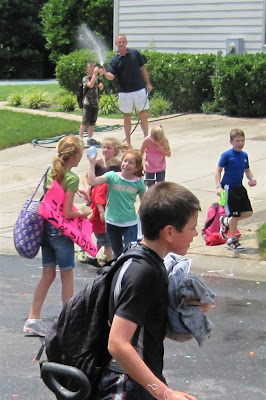 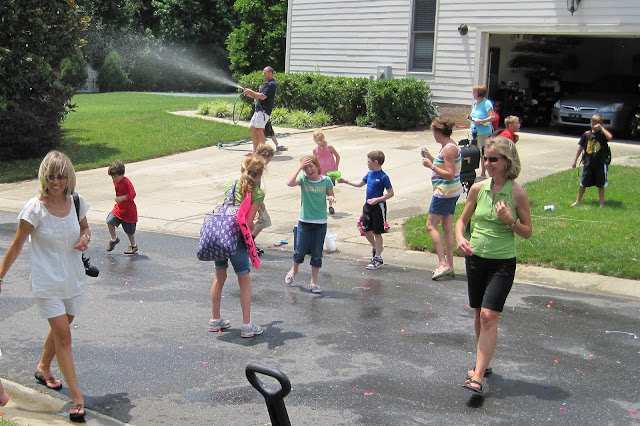 It was a fun free-for-all!!! See how wet the street is? It is also covered with hundreds of tiny balloon remnants... which the parents did clean up before heading home. This is such a neat tradition that I am sure will be a fond memory for all the kids! But that was not all.... 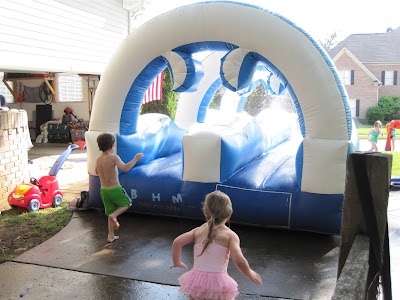 Our corner of the neighborhood was invited to an after-school, end-of-the-year celebration! Everyone headed home from the bus stop to change into swimwear, and then we all converged on one of the neighbor's yards for a wonderful water party! The kids all loved this giant, inflatable slip & slide! All afternoon we had an orderly line of kids racing two-by-two through the slide. 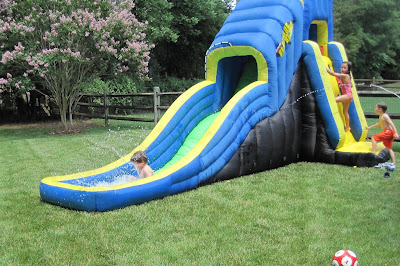 The backyard also had a little pool, and another water slide. At least 15 families were represented, with what seemed like several dozen children running around. Moms visited, some dads took off work, and several large tables were filled with yummy treats. It really was quite the party. What a fun way to end the school year, and to spend a hot afternoon! 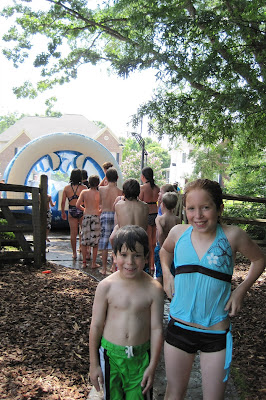 How fun! I wanna live there!!!

That is so cool! (No pun intended!)

This makes me ache for a place like this with such life and joy! :) Glad you shared this. What fun. And yes, bring on summer...

What an absolutely FUN tradition! One that the kids are sure to remember! Looks like it was a wonderful way to cap of the school year! I love all of the pictures you snapped even in the midst of the water balloon fight!

What an amazing last day!! I love it.