Some days just don't turn out at all the way we expect them to. This morning my plan was to get up, have my tea, read my Bible, eat breakfast, drop Zac off at work, get Abbie to the soccer fields by 11:30am, watch her game, and then spend the afternoon and evening at a crazy youth group event. I got as far as tea and Bible.

Jacob has been sick the last couple of days. He was up late Wednesday night/early Thursday morning complaining of pain near his left ear, and had a 101 fever. My husband is a rock star with sick kids --- they wake HIM up in the middle of the night! So I didn't know what was going on until we got up Thursday morning. Not only did Jacob have a fever, but he also had a wierd lump under his left ear. Jacob wasn't going to school, of course, but I was scheduled to teach Bible study. And Gil had to go to work. So we decided I would take Jacob with me, and he could sit quietly as I got through the first hour, then we could come home when it was time for the ladies to watch the video. That plan seemed fine...

But, at church, Jacob was feeling a lot worse. He had the chills, and was looking terrible. Just as ladies started to arrive, Jacob came over to tell me he didn't feel so good. I was like a deer caught in headlights as I tried to figure out what our options were since I knew what was coming next. But before we both knew it, he was getting sick all over both our shoes! Poor baby! And it was right up front in the classroom! I tried to get him down the hall to the bathroom... I am pretty sure we left a trail. Once he finished getting sick in the bathroom and I got him cleaned up, we did our best to get home as soon as possible.

I felt horrible! I had been so conflicted over my responsibilities at church and taking care of Jacob... I was so sorry I had taken him out, and so sorry that because of my decision there was a huge mess to clean up. Of course, we had ladies who stepped up and Bible study carried on without me. And I am ever so grateful for the excellent housekeeping staff at our church.

Thursday, Jacob's fever spiked to 103.5 and was pretty much there all day. He continued to throw up, so we figured he had a virus. Friday it was more under control in the 99 degree range, but he still had the lump on his face and it was causing him discomfort. Normally, a parent would get their child to the doctor, right? But we haven't had health insurance for over 3 years, and the budget is tight, so we were really weighing what we needed to do as we prayed he would get better.

Saturday mornings, Gil gets up and attends an early-morning men's Bible study. When he got home, he walked in the door he said, "We're taking Jake to the ER." I was glad for a plan of action, because Jacob's discomfort and pain were definitely increasing and I was getting worried. Plus, Jacob now had a patch of cold sores breaking out in his nose. We decided we'd try the minute clinic first (it costs a lot less, especially if we only needed a couple of prescriptions), so Gil and Jacob headed there while Abbie and I took Zac to work, then met up with Gil and Jacob. Once it was our turn, we were told that this looked pretty serious and could even be life threatening! We definitely needed to be at the ER.

Abbie had a soccer pictures and a game coming up, and Zac was at the fields working as a referee, so it was decided that I would take Jacob to the ER and Gil would take care of Zachary and Abbie. 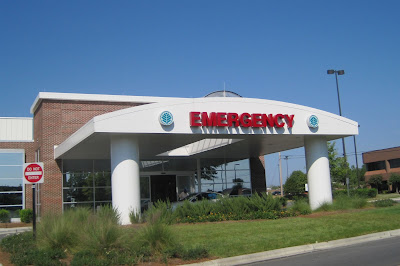 We arrived at the ER at 11:15 a.m. Jacob was starting to feel pretty miserable. I was a little stressed and hoping Gil would get the other kids situated and be able to join me soon. Jacob was most worried about getting a shot. I explained to him that they would probably need to give him an IV... letting him know how it would work and what the advantages of that would be. We were in the waiting room about 45 minutes, then saw a doctor who said Jacob would need a cat scan. We were taken to another room to spend the day, and after two tries, he did get an IV put in. 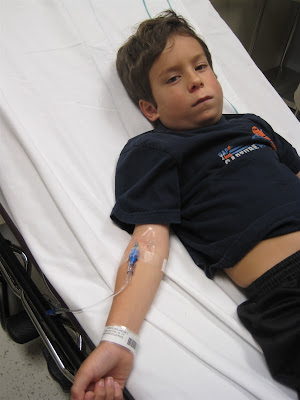 Jacob was feeling pretty miserable. His pain was getting much worse. We were both glad when Daddy arrived. We were taken for a cat scan, and Gil was able to stay with Jacob during that. 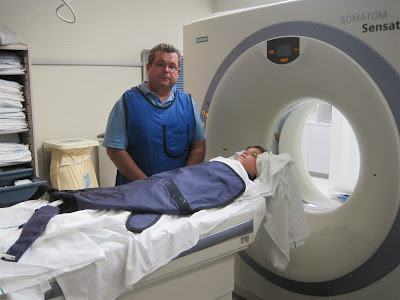 I had to stay out in the hall, but I could see into the tech's room. Here is my baby's head... 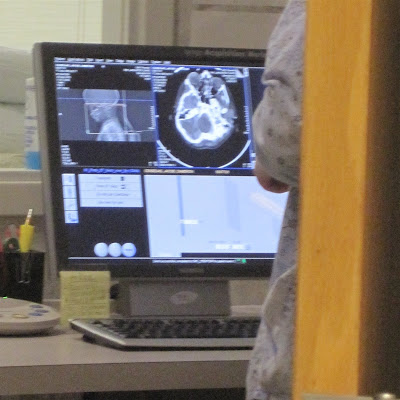 We were told it would be at least 30 minutes before we had the results. No treatment could take place until we knew what the diagnosis was. Meanwhile, Jacob was getting worse by the minute. It was now after 1 in the afternoon and all the motrin and tylenol we had been alternating for the past couple days had long worn off. His fever was back, and he was not a happy camper. Our friends Tom & Kathy had come to the hospital just as we were going back for the cat scan, so they were in our room with us. It was great to have the support, especially since Kathy was a nurse. We were commenting about how on tv everything that takes place in the hospital seems to happen very quickly --- they never show all the endless waiting that we were going through.

Finally, the doctor came in and said that Jacob has an infection of his parotid gland, which is a salivary gland. We were told that Jacob would have to be admitted to the hospital, at least overnight! He would have to be transported downtown by ambulance! Not at all what I was expecting, to be sure. The doctor ordered meds for Jacob, including a dose of morphine for the pain. Jacob quickly felt better. 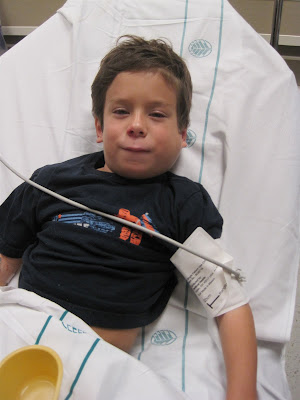 We had two cars at the hospital, so Tom helped Gil get the van home, while Kathy stayed to wait with me. Meanwhile, Jacob was asking dozens of questions, and even saying he was having a "fun" day. His nurse had come in to tell us he was going off shift and let us know the status of things. He told Jacob how great he was doing and how brave he was. Jacob asked him if he was going to going to get something for being good! That caught the nurse off guard, but he returned several minutes later with a stuffed lion, a pack of stickers, and some crayons for Jacob! Two hours after the morphine dose, the EMT's arrived. Jacob was very excited to be able to ride to uptown in an ambulance! 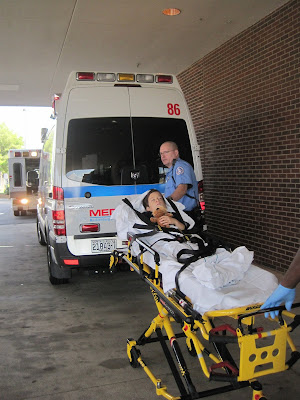 I said goodbye to Kathy and followed Jacob to the ambulance. He wanted me to take plenty of pictures of the inside, but I will spare you. I think this was his first smile of the day, though! 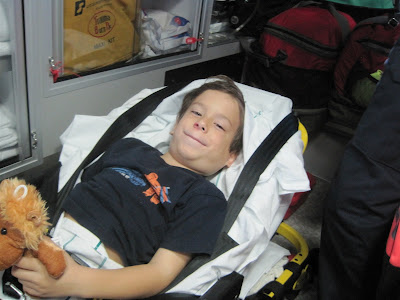 But, you can tell he still feels pretty miserable. 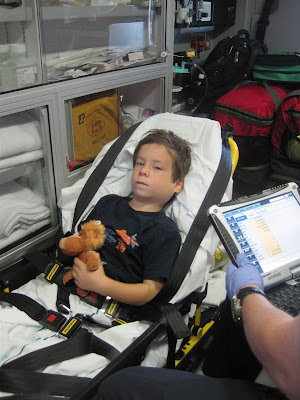 We got to the children's hospital where they had a room waiting for us. Gil and Zac were already there! Abbie didn't think she could handle being in the hospital, so she stayed at her friends and planned to spend the night. Turns out she scored the two goals in her soccer game today, leading her team to their first win of the season! {I'm sorry I missed it!} 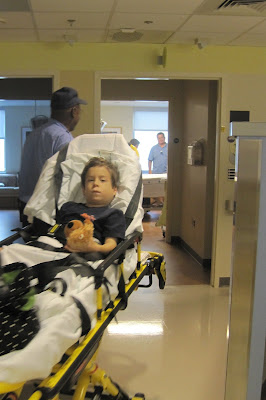 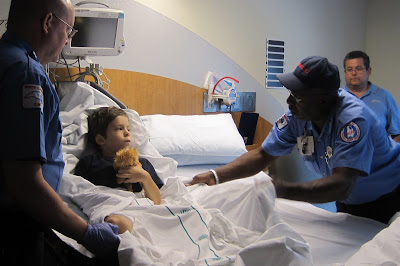 Poor Jacob had only eaten about 3 bites of cereal in the morning, and had nothing else to eat or drink all day! We got to the children's hospital around 5pm, and finally at 7 he was allowed to have something to eat. See if you notice the commonality between the next few photos... 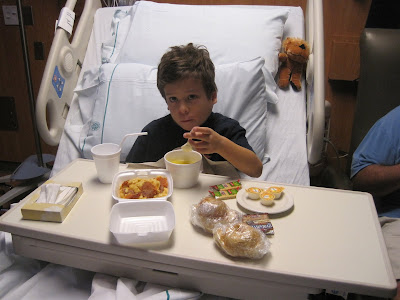 Here are his day nurse and his night nurse as the shifts are changing. We know he is in good hands! 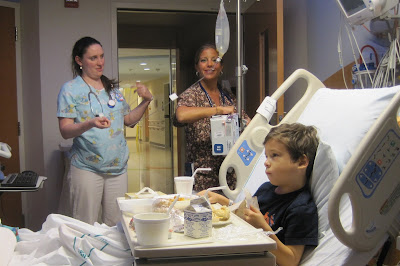 Big brother Zac was glad to be on hand to support his baby brother. And baby brother really appreciated it! 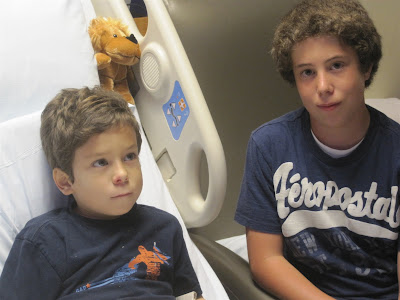 Jacob is finally resting comfortably. Daddy and Zac left at about 8pm. So did you notice? Jacob's eyes were glued to the tv from the moment we got into the hospital room! First it was Spongebob, then it was G-Force. He was kind of oblivious to everything else. 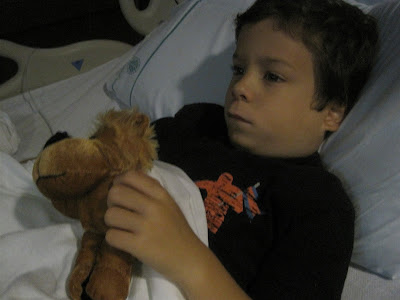 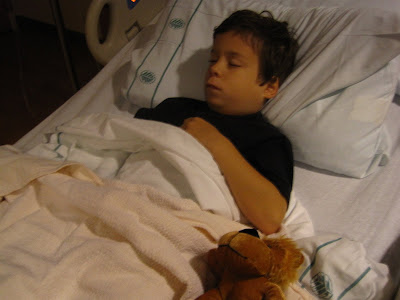 And what else is a mommy to do, but blog about our eventful day, that didn't turn out at all like I had planned.

Our doctor said we might be here for several days. We have to wait and see how Jacob responds. All day I have had scripture come to mind, as well as a peace that God's timing is perfect. I know He is in control, and that He will be glorified through this. I am thankful for our church family, for all that are praying for our sweet Jacob.

So do not fear, for I am with you;
do not be dismayed, for I am your God.
I will strengthen you and help you;
I will uphold you with my righteous right hand.
~Isaiah 41:10

Email ThisBlogThis!Share to TwitterShare to FacebookShare to Pinterest
Labels: faith, my family

Your abilities amaze me! Praying for your family and knowing that God will provide. However, let the rest of us know how we can help as well!

Wow...Terri...I am so sorry for poor sweet little Jacob!!! I can't believe y'all have been going through this!! Is there anything we can do? Please let us know how we can help!!! We will definitely be praying for y'all!!!

Terri, we have been praying for you guys & especially Jacob since we got the email yesterday. SO glad that he is home now & feeling much better! Hope that you all have a very restful night! Many blessings dear friend!