Three years ago, Abbie played soccer on a team at our church. Coach Dan was the sweetest, nicest man. She wasn't too sure about playing soccer... had NOT enjoyed it before... so Coach Dan was the perfect match with his sweet, encouraging ways.

About a year and a half ago, I was commissioned by woman to make an album for her daughter and son-in-law's anniversary. I received the photos and was so blessed to discover that the album was for Coach Dan, his wife Angel, and his precious family! When Dan coached Abbie, he had a young son, and a daughter who played on the team with Abbie. Their anniversary book photos revealed that their family had since grown with the adoption of two children from Liberia. It was such a pleasure and my honor to get a glimpse into their lives and hearts as I created this keepsake for their family. 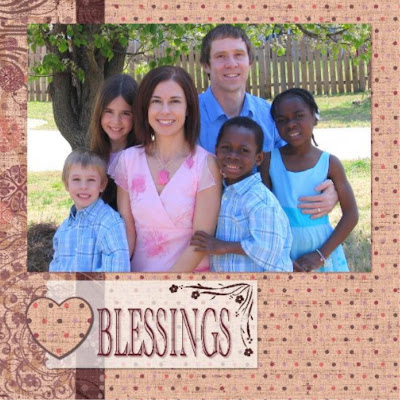 Just last night, I was surfing the web preparing for a talk I am giving tonight. I stumbled upon a link to a blog that belongs to Dan and Angel. My delight in discovering their online journal quickly turned to compassion and prayer as I read that their daughter Angelyn has been in the hospital for the past two weeks with complications from a ruptured appendix. Today Angelyn, who is only 8 years old, is facing another surgery. Please join me in lifting this precious family up in prayer. I am praying for healing for Angelyn, strength for her parents, and wisdom for her doctors and caregivers. Dan and Angel, whom I know barely at all, obviously have a heart to serve the Lord and minister to His orphans across the world.
Posted by Terri at 12:20 PM

I will pray for little Angelyn! What a neat story of how God brings people into our lives & allows our paths to cross...thanks so much for sharing the story!

We will be lifting her up in prayer. Keep us posted. I enjoy reading your blog. Please stop by my blog and accect the award that I have waiting for you.

Have a blessed day!

I will definitely be praying for this sweet little girl. Kepp us posted.

Hi Terri! So good to see you at the conference. Thanks for all your grocery tips.