"The God who made the world and everything in it is the Lord of heaven and earth and does not live in temples built by hands. And he is not served by human hands, as if he needed anything, because he himself gives all men life and breath and everything else. From one man he made every nation of men, that they should inhabit the whole earth; and he determined the times set for them and the exact places where they should live. God did this so that men would seek him and perhaps reach out for him and find him, though he is not far from each one of us. 'For in him we live and move and have our being.' As some of your own poets have said, 'We are his offspring.' ~Acts 17:24-28

Earlier this week, I mentioned that Gil and I celebrated our 14th wedding anniversary! Our marriage has been characterized by many moves. I have often said that our life turns on a dime. We are currently living in our 10th home since we got married in 1996! We have lived in three different states: California, Colorado, and North Carolina. It has been an adventure, to say the least! Through it all, we have seen the Lord's hand as He has guided us and moved us.

When I met Gil, I was renting a condo just a couple miles from the university at which I worked. That was our first home once we got married. But when Zachary was on the way, we looked for a house to rent. We found an adorable little place with a beautiful yard in a cute community. The house just happened to be next door to house where we attended Bible study... the host couple told us it was for rent. After Zachary came along and we decided that I would leave work to stay home full time, the financial realities of living in Southern California on one income began to set in. We decided that it was the right time to step out in faith and realize our dream of living in Colorado.

When we first got to Colorado, we lived with Gil's sister and her family for almost 5 months. Their home had a newly-finished basement with plenty of room for storing our stuff, a bedroom for Gil and me, a nursery for Zachary, and a separate living area for us. We paid rent, I cooked weekday dinners for both families, and watched my 4-year old nephew during the day. By Christmas, we found a house to rent in a little town about 1/2 an hour from Colorado Springs. It was actually the old parsonage of an unused church. The tiny town was just a few blocks square. I enjoyed my slow strolls with Zachary, a toddler by now, to the post office, little market, and bookmobile. We lived in that house for about a year and a half, and then Abbie was born! When she was just a few days old, a couple from our church asked us to move into their house so they would not have to worry about it while they moved to Denver for a new job. So when Abbie was just a month old, we moved again!

This fourth home was on two acres about 20 minutes outside of Colorado Springs. While the parsonage had been rather old with a basement that flooded during thunderstorms, this house was much newer and nicer. We felt very blessed. But after about a year, we were ready to buy our first house. To my surprise and delight, we ended up with a brand-new home just outside of Colorado Springs in a growing community. We actually lived in that 5th home for three and a half years! Since I grew up moving, it was actually the longest I have ever lived in one house in my entire life!!!

We were happy in the Colorado Springs area and felt that we were settled there. We had an idea of a neighborhood we would next like to live, because when Jacob arrived, our home was feeling rather small. We were thinking of building a house, probably in the fall of 2004. But as the year began, Gil had the opportunity to move up in his career -- which meant we would be moving to Denver. We found a beautiful, brand-new home just northeast of Denver and settled there in April of 2004. We loved our new home and our new community, but also knew that for Gil to continue to move up in his career we would have to move out of state at some point.

To our amazement, that opportunity came less than two years later! His company had an opening in Charlotte, and he got the job. He arrived here in February of 2006 while I stayed behind to sell the house. His company provided him with a furnished apartment. When the kids finished school in May, we were immediately on the road to go visit Gil for a month. That month turned into the whole summer... and then we just decided to stay so that our family could be together. Meanwhile, the Colorado house just sat on the market, with no activity, containing all our belongings and looking like we still lived there.

We lived in the apartment in Charlotte for 9 months total. For 6 of those months, I was commuting our kids to school , spending almost 4 hours a day driving back and forth! We had built a new house near the school they were attending, but with the Colorado house not selling, we let it go. Finally, in March of 2007, we got to the point where we just had to get out of the apartment, so we found a house closer to the kids' school to rent. We found a great place in a quaint and beautiful neighborhood. The 10-minute commute to school was a dream-come-true! And just six weeks after moving in, we headed back to Colorado because our house had finally sold and we needed to pack up and move. We had a substantial loss on that house, but God, through Gil's job, graciously provided the funds we had to take to closing. Life was good and then in June, Gil lost his job. We were grateful that the Lord had given us this place to live with a much lower rent than the mortgage on the house we had hoped to buy. We knew, even with this setback, that the Lord had brought us to Charlotte, and that this is where we wanted to stay and put down roots.

As it got closer to Zachary starting middle school, I was becoming increasingly concerned about the quality of education our kids were getting. Jacob was going to be starting kindergarten and Abbie was going to have to move to the local elementary school. As the 2008 school year started, all my kids would be in new schools... I was feeling burdened that they be in BETTER schools in our district. So I spent the spring and summer exploring options. I really felt that the Lord was leading us to move, but rentals in our price range and desired area were hard to come by. Just days before the new school year began, I gave it completely up to the Lord. I prayed and told Him that I knew He loved my children more than me. He must have a reason for having them at the current schools, and I would trust Him. I asked for a new vision for the current home we were in so that I would be content. That was during my morning quiet time on a Tuesday. At noon that day, I got the mail, and in it was a notice from our landlord that they wanted the house back! God said we were moving! At 4pm that day when I checked Craigslist {for the 1,000th time that summer!}, this house was newly available. 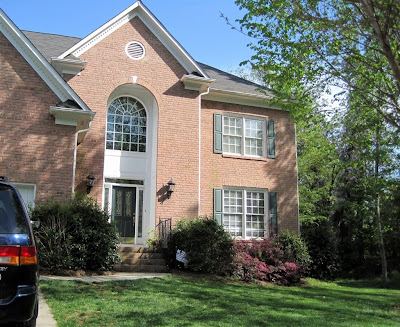 By Friday of that week, we had a signed lease, and my kids started the school year in their awesome new schools! We have loved living here. We are in awe of God's goodness at what He has provided. This house is more than we ever expected. We love living just minutes from our church, close to shopping, and having the great schools for the kids. Our home is at the end of a cul-de-sac. It feels like we live in a park because the setting is just so beautiful. We truly feel so blessed here, in our tenth home since we got married.

Well, life is never dull. This week we received the unexpected news that the homeowners are planning to place this house on the market in just a matter of days.

Delight yourself in the LORD and he will give you the desires of your heart. ~Psalm 37:4

Our desire is to keep our kids in their current school district... we would love it if we could buy this house... I would love to truly be settled, to be able to plant flowers and see them come up the next year, to stop moving so much. In all of this, whether we stay or move, wherever the Lord intends for us to live, we look to and trust in Him and His perfect plans for us. And we know that whatever happens, it will only be by His hand. Our current situation is such that it would take a miracle for us to buy this house, or any house. Even being able to rent somewhere else is stretch for us right now. So in our own power, we can do nothing. But nothing is impossible for God! I'll let you know how it turns out.

Trust in the LORD with all your heart
and lean not on your own understanding;

in all your ways acknowledge him,
and he will make your paths straight.
~Proverbs 3:5-6

Email ThisBlogThis!Share to TwitterShare to FacebookShare to Pinterest
Labels: moving, my family

I love your story, Terri, thanks so much for sharing! It really IS moving & so encouraging to see how God has provided for your every need (& move) even before the need arose! I know the Lord will honor your faithfulness & trust in Him! Blessings sweet friend!

Great story! I can totally relate to the moving thing!! I hope you can buy that house too, very pretty!! ;)

i love this story and love the faith that you had! continue to have it my friend and He will give you the desires of your heart. i will be praying for you. what another twist to your moving story! makes for a great testimony of His power and your faith!