I am so glad that my sweet little boy is feeling better after having SIX teeth pulled this morning! This afternoon he was his sweet, happy, playful self. I was happy to hug him and get this picture taken, so thankful that he is feeling better! 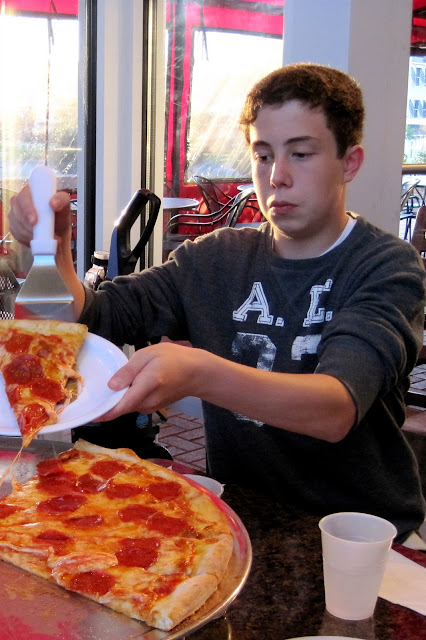 Yesterday, Gil came home early from work and took us all out for pizza! He wanted to spend some extra time with Jacob before his oral surgery this morning, and give him a special meal. 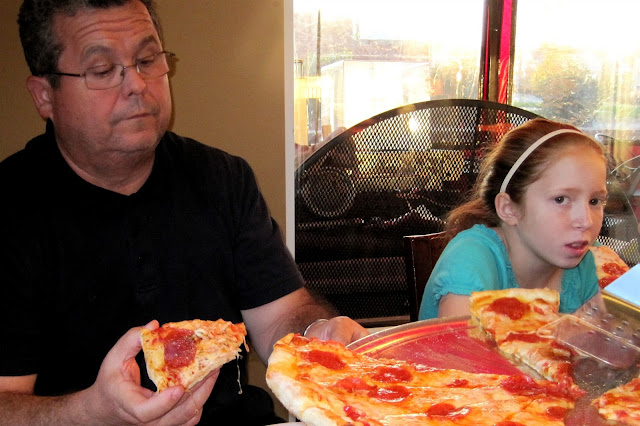 We all enjoyed the special treat and family time! 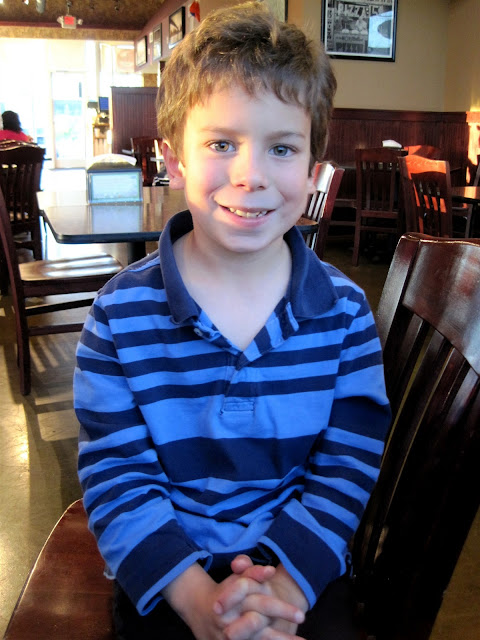 Jacob always loves having extra time with Daddy! Overall, he was feeling ok with what was coming up today. 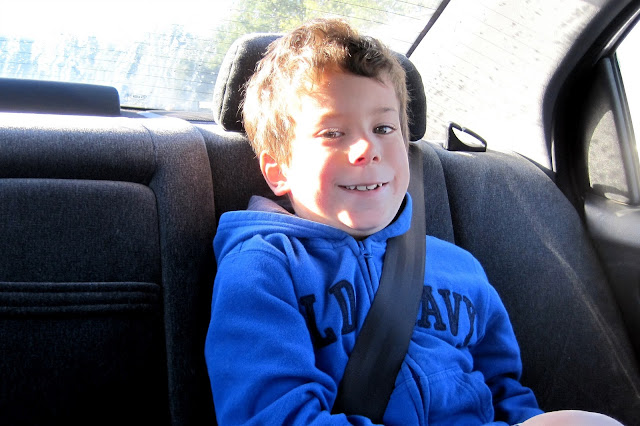 This morning, on the way to the oral surgeon's, Jacob was feeling pretty good. He actually said he was excited, because later he would get to eat ramen noodles! My brave little guy also said that he was ok with having to get an IV, if that was required. Of course, he was relieved to learn that no IV was necessary! I was also very, very glad that Gil took today off work, so he could be with us. So was Jacob. 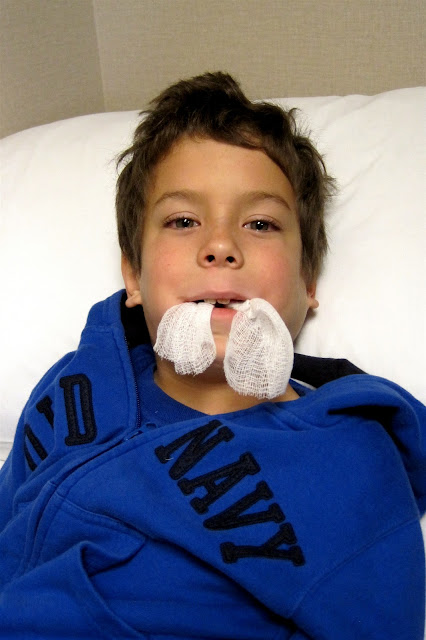 The doctor told Jacob he would look like a walrus after the surgery... I guess he was right! They took Jacob back at 9:28am, and at 9:57am the doctor came out to tell us that everything had went perfectly and that Jacob is a model patient! A few minutes later, a nurse came to bring us back to Jacob. He had been under general anesthesia for the extractions, so he doesn't remember anything but the "strawberry flavor" of what he inhaled and everything going black.

Jacob did remember that the doctor had "prescribed" a milkshake immediately following surgery. I asked him what flavor he would like, and the nurse asked what was his favorite flavor of milkshake... he said he didn't know because he has never had a milkshake before! I said, "Oh, you have only tasted your brother or sister's?" We were laughing so much, and the nurses were all giggling in the background. I said, "What a deprived child we have here, who has never had his very own milkshake!" 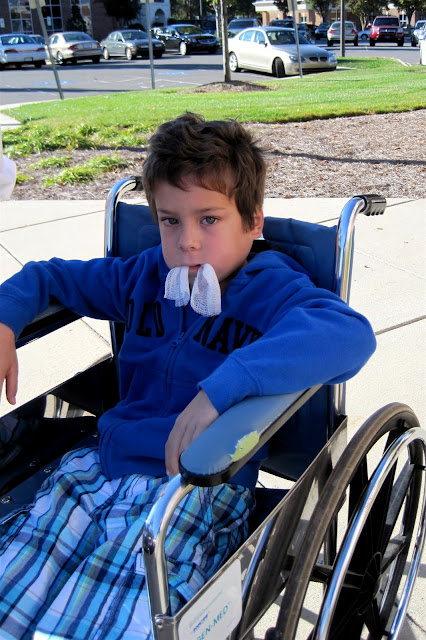 Gil brought the car around and the nurse wheeled Jacob out. Apparently, this was a big deal, because later on the phone he told Grama all about how he got to ride in a wheelchair! 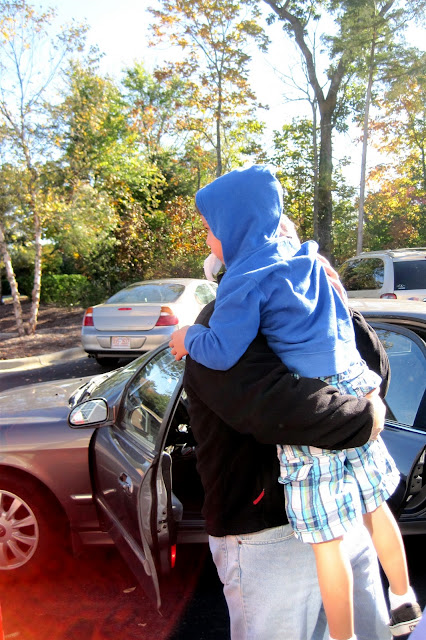 It was so sweet to see Gil pick up his baby boy to put him in the car. Jacob was capable of walking, but Daddy was taking extra good care of him!!! 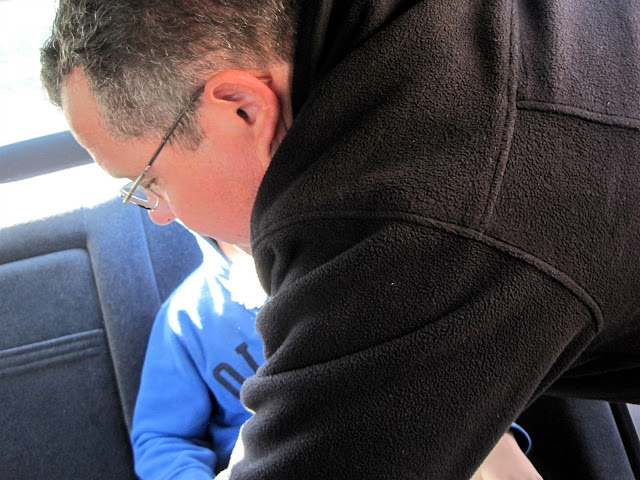 I just love how Gil is so tender with our kids. I love that side of him!!! 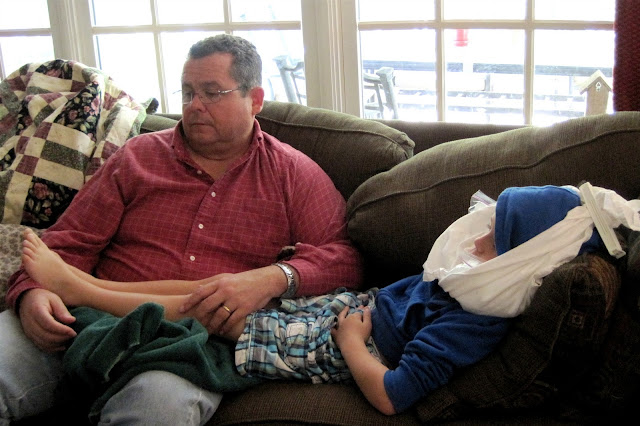 We did run through the drive-through and pick up a milkshake, but it was a little while before Jacob felt like having any. He had a rough trip home and the first couple hours were pretty tough. But he soldiered through, watching tv on the computer with Daddy, ice packs on his face, while I went to get his prescription filled. 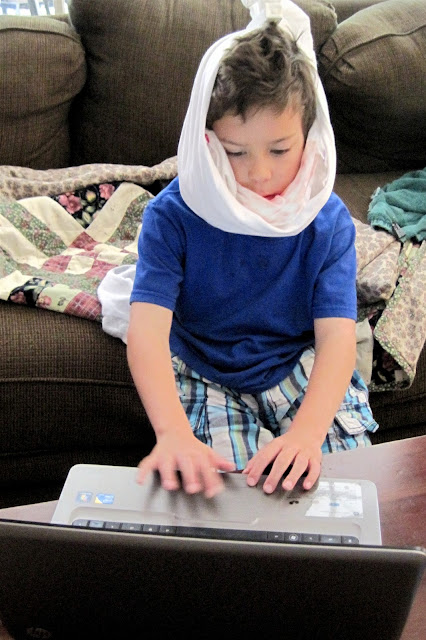 We were told that he would pretty much sleep all day. Nope. After taking his pain medicine, he did finally nap for about 10 minutes. But once the medication took effect, he popped up, sounding chipper, and said, "I feel GREAT!" From then on he was a lot better, and enjoyed watching cartoons on the computer for a couple of hours.

And for some reason, I went on a major cooking spree while he was resting on the couch. Once Jacob was settled, I made sausage, mushroom, & pepper pasta sauce, a big pan of homemade mac & cheese, and hummus! I guess I had a lot of nervous energy to expend, and my love language is food!!! 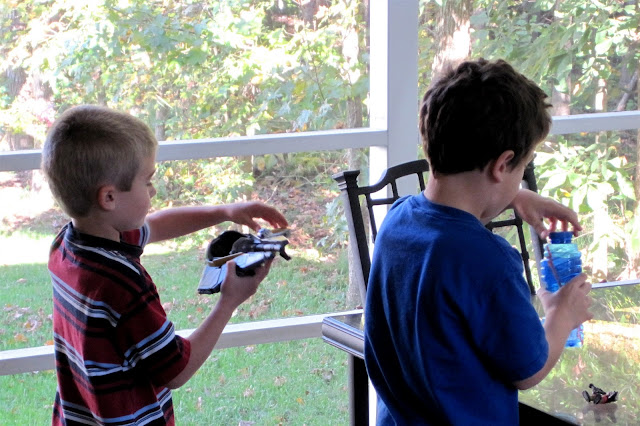 This afternoon, Jacob actually did some of his homework and enjoyed playing with a little buddy. Jacob enjoyed snacking on his milkshake throughout the day, eating applesauce, and chowing down on mac & cheese for dinner. I am so glad he is feeling better. We have been blessed with many notes and calls of friends who have been praying for our sweet Jacob. We are so appreciative!!!
Posted by Terri at 8:07 PM

thank you, Jesus, for quick and easy surgery! all things considered, your little man seems to be doing great. modern medicine is amazing... your sweet husband is a gem... and jacob is indeed a trooper!

Terri-
So glad Jacob recovered so quickly! I'm sure it was a nerve wracking day for all of you!!! What a sweet little trooper he is! Gonna have lots of stories to tell his kids about all his many adventures in the hospital, dentist, etc!!!

waterfall taps are easy to maintain. The finishes for cheap taps include brass, aluminium, iron and copper. A variety of shower heads manufactured by leading manufacturers is available at concept-zen.com. You can choose from extra large shower heads, jumbo led taps, round, square and rectangular shower heads as well as spiral, orbit and octopus shower mixer, among other varieties. So select, compare, avail discounts and order the right basin tap for you needs.

A man of taste quality of life is high, especially bathroom design often can reflect a person's quality of life.Waterfall taps are a stylish way to make a statement in your bathroom, and are becoming increasingly popular and very affordable. http://www.plumpinguk.co.uk/kitchen-taps/wall-mounted-taps.html.It will make your life more refineddand we have created a lot of artistic products of"stylish personality and quality life".

Our pneumatic factory was founded in 2000,CHECK HERE. In decades of serving China pneumatic industry, we have built our reputation on product knowledge, world class suppliers, application support, and value add services. Our commitment to our employees, customers and vendors is the core of our business beliefs. In our factory, there are more than 80 front-line workers, 3000 squares working shop.Our main products are air Pneumatic Cylinder, solenoid valve and also a lot of pneumatic fittings like Air Gun.