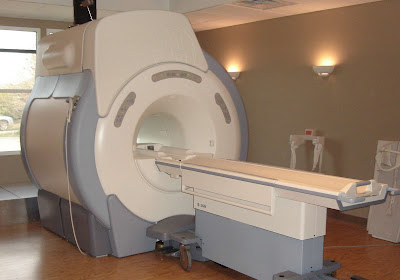 My baby boy has had the quite the week. Monday, I took Jacob to see his ears, nose, & throat specialist to get his salivary gland swelling looked at again. This is the same issue for which he was hospitalized last year. We have been doing our best to manage it, but have had to put him on antibiotics a few times in the past six months. About four weeks ago it became swollen, and after two rounds of antibiotics, it is still swollen. It was time to get it checked out.
The doctor agreed that it was time for an MRI. This gland that is acting up is the parotid gland. A few weeks ago I googled it just make sure I was spelling it correctly... the page of links that came up was pretty scary. The MRI will hopefully rule out those more serious situations.
Jacob had his MRI yesterday and did so well. He was SO still throughout it and so brave. He was amazing. Even when he had to remain perfectly still half way through while they gave him a contrast dye injection, he bravely endured and never moved his head. What a trooper! I am so proud of him.
The tech had him lay down, put cushions around his head to keep him still, and gave him earplugs. She then covered him with a blanket, and attached a "cage" over his face before sliding him into the MRI equipment. There is nothing like sitting in that room next to that monstrous machine and seeing nothing but my baby's nose and chin and closed eye as he bravely endured the noise and the pressure of remaining perfectly still for nearly 30 minutes.
I sat next to him, praying through the entire procedure. Once again, my heart hurt for all the mommies who sit through countless tests for children far more sick than my child. I also marveled at this giant contraption, built by man, trying to determine what exactly is going on inside my little boy's head. All the while I knew that my Heavenly Father knows exactly what's going on, and that Jesus has the power to heal him in an instant.
We see our doctor tomorrow morning at 7:15 for the results. I am looking forward to answers and ruling out anything serious. I am at peace.
Posted by Terri at 7:46 PM

Beautiful post, Terri! WHAT a sweet trooper your little Jacob is!! I cannot imagine how strange it must feel to see your child inside such a huge contraption, but I loved the way you put it about God already knowing what is going on! I pray that He gives the doctors wisdom & clear understanding, so they can figure out what is going on & treat it. Praying for you guys!

Saying prayers for sweet Jacob! Hope all is well today :)